Whether your business is brand new or it’s been around for a while, you’ve probably thought about putting together a financial forecast.

Most lenders and investors will expect it to be part of your business plan. Forecasting and comparing your actuals with what you projected should be a regular and ongoing part of your process—not something you do once, or once a year.

But how do you know if your forecast model is reliable?

Before we get into how you can assess whether a forecasting model is reliable, let’s start with what forecasting actually is. Business forecasting is essentially guessing (or predicting, or estimating) future numbers such as future sales, cost of sales, and operating expenses, by month, quarter, year, and so on.

Forecasts might also predict or estimate other business numbers such as web traffic, conversion rates, or social media engagements.

How is forecasting different from budgeting?

Many people will use a budget to mean a spending plan with built-in limits, a maximum amount that a manager or a company can spend. In that case, a budget is more of a management command than just a forecast.

How do you know if the forecasting model that you’re using is reliable?

I had the great privilege of taking a grad class in mathematical modeling of human phenomena taught by James G. March at Stanford.

He suggested three factors that should be used to judge the value of a forecasting model:

1. How well it explains the past.

For this, you run the model with actual data from the past, and evaluate how well it would have predicted what really happened.

2. How well it predicts the future.

Of course, we have to guess the future, but you can also evaluate the quality of the inputs and outputs. Are the inputs based on data you can get? Assumptions you can make?

For example, in the context of financial models for business, I always liked my own model that took future collection days and future percent of sales on credit as inputs to predict future balances in accounts receivable, as a component of a model to predict cash flow. And it took an educated guess on direct costs, inventory turns, and minimum inventory orders to predict the amount of working capital tied up in inventory, which also affects cash flow.

I liked very much the way that Marsh, while teaching the class, respected the beauty of an elegant model. I think those of us who like modeling, and create and work with mathematical models, can appreciate beauty in the way a model is conceived and executed. There is such a thing as elegance in code, and elegance in math.

And, on that subject: Marsh would often lump points one and two above as what he called “truth.” Then he would say that financial modeling was about “truth and beauty.” I still enjoy that thought, and the class I’m talking about was decades ago. 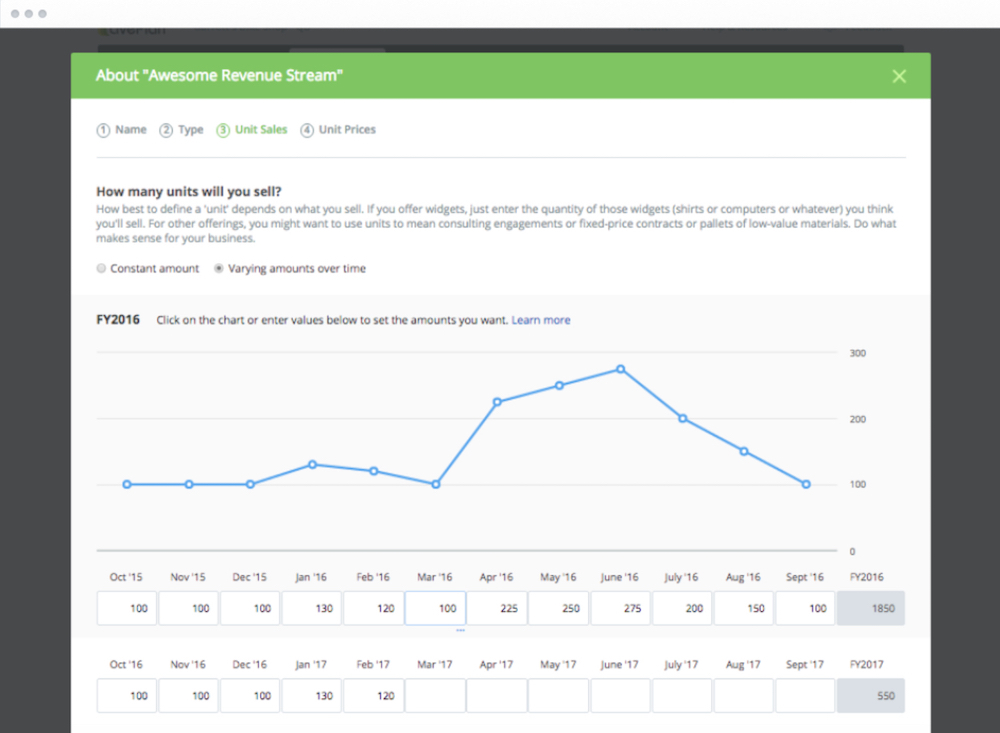 Why do entrepreneurs sometimes resort to the “hockey stick forecast,” especially when they pitch to investors?

I first heard the term in the 1980s, at lunch with a venture capitalist friend, when he said he was “tired of all those hockey stick forecasts” he was getting from startups.

What he meant was a forecast that showed slow or steady growth until suddenly turning upward, at an inflection point, into spectacular growth. The turn upward is like the bend in the hockey stick. Angel investors and venture capitalists look for companies whose sales can shoot up in the future, like the hockey stick.

But hockey stick projections are also always suspect. They generate cynical responses and the need to justify with real phenomena in the drivers, such as web traffic or conversions or subscriptions. They don’t like it when the sudden growth is decreed, as if from on high, with no rhyme or reason to it.

A version of this .